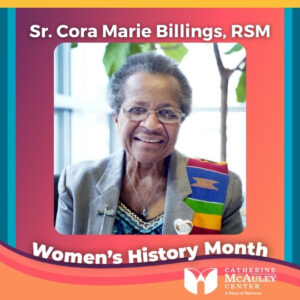 To celebrate Women’s History Month, CMC highlights stories of women in our community addressing the Critical Concerns of the Sisters of Mercy. In this final week, we examine the importance of Nonviolence and highlight the impact and interwoven nature of the critical concerns by reaching out to Cora Marie Billings, a Sister of Mercy who is outspoken about racism, violence, and its effect on our neighbors.

Sr. Cora Marie’s connection to the Catholic faith stems back to her great grandfather, a slave for the Jesuit community at Georgetown in the late 1700s. He was raised in the Catholic faith and eventually moved his family to Sr. Cora Marie’s hometown of Philadelphia. Under her great grandfather’s wishes, Catholicism was retained through generations of her family. But even as a “cradle Catholic”, Sr. Cora Marie’s upbringing in the Roman Catholic church was difficult at times due to the treatment she received at school and within the local ministry as an African American woman. Withstanding these obstacles, her dedication to her faith did not waiver, and  ten years after Black Sisters were accepted into Sisterhood, Sr. Cora Marie became the first African American Sister from Philadelphia in 1956.

This was not the only ‘first’ title that Sr. Cora Marie would attain in her life. In 1968, she became a co-founder of the first National Black Sister’s Conference (NBSC) in Pittsburgh, a turning point in Sr. Cora Marie’s life as she began recognizing the need to work against racism and for Black liberation. Realizing the impact racism had on her life and on society as a whole began with important conversations with her fellow Black Sisters about race and faith. Immediately after the NBSC, Sr. Cora Marie returned home and attended a Black Power civil rights protest. “My cousin picked me up from the convent and took me to be a part of the movement. That was one of the first times that I was active in the movement and in solidarity with my Black brothers and sisters. This was not something that Sisters always would or could do. I went, I learned from it, and I became a different person because of it,” Sr. Cora Marie stated.

During our conversation with Sr. Cora Marie, we discussed the intersection of racism and nonviolence, and how the philosophy of nonviolence has impacted anti-racism work in the U.S. “With the tension of the 1960s movements after King’s assassination, people didn’t look at what King was really speaking to. Although he died violently, he was always speaking and pushing for nonviolence.” When asked about the status of the movement and the philosophy of nonviolence today, Sr. Cora Marie shared, “Today, some things are even worse. There was a song in the ’60s… I think it was Peter Paul and Mary’s ‘When Will They Ever Learn?’. We’ve gone through all of this so many times; people have been killed, there have been lynchings… a lot of those things are still happening today. A large part of the problem is that in the United States, we train people to fight or bully violently. We TRAIN our police to be violent… Yes, there are responsibilities as a police officer, but it can be done in a nonviolent way that doesn’t take away the rights (or life) from someone.”

When asked about how we create change, Sister Cora Marie made it very clear that nonviolence was and still is a value that our country needs to learn in order to make any difference in the fight against racism. “I need you as much as you need me. We need to be relational with each other… We (as Catholics) talk about being a part of the body of Christ, and when we say that, that means that what happens to one of us is happening to all of us… If someone is suffering from racism or violence, then we all are suffering. Until we become relational and listen to each other, racism (and violence) will persist.”

Through all of the injustice and violence, Sr. Cora Marie still finds hope in the face of systemic racism. Obstacles like police brutality persist in the United States, and the Summer of 2020 was one example of the ways that violence and racism hurt us all. Sr. Cora Marie believes that it is our responsibility to respond in a way that will not perpetuate such hurt. “It is horrible for anyone who dies violently, and I think George Floyd’s death was a moment that is creating change. (Society) will accept the challenges of racism at different times, and this is one of those times. And things are changing… The hope is that there are more people that are becoming aware and trying to be aware. If we continually deny the evil that is present, things will never change. Having people that are willing to talk and willing to learn is a big part of the hope that I have to fundamentally change our society.”

We would like to thank Sister Cora Marie Billings for her willingness to speak with us, and with audiences across the country, about her life and legacy in anti-racism and nonviolence work with the Sisters of Mercy. May we all take time to listen to one another and be relational in an effort to put an end to racism and violence.

*Donations are accepted outside of these hours by appointment only*