In living by the words and actions of our namesake, Sr. Catherine

McAuley, CMC works to help individuals achieve independence, confidence and self-sufficiency through education. We remain proud to see a program that began with teaching and preparing women to gain their GED expand to something that impacts over 460 individuals every year. Our Adult Basic Education Program continues to strive towards our goal of making a more involved and welcoming community through education by adding new classes, including the revamped citizenship preparation course.

CMC’s education program has offered citizenship exam preparation courses for years, including a former six-week class held on Saturday mornings with the opportunity to practice exam questions in one-on-one tutoring sessions throughout the week. The most recent session began in October and consists of a twenty-six week long course with classes held every Wednesday. Students may opt in to the weeks that are most relevant to them. Along with an increase in lesson content, the new format allows students to hear from guest speakers and provides field trips to different cultural and historical centers around Cedar Rapids to encourage further involvement with the community.

The focus of the newly-designed Citizenship class goes beyond exam preparation and includes lessons on civics and a more comprehensive introduction to American History and how events impacted and continue to impact our country. With the help of Education Program Coordinator Mari Hunt Wassink, CMC’s education program hopes to “not only help students successfully pass the naturalization interview and test, but also to equip them to become informed and engaged U.S. citizens afterward.” Subjects like the voting process and the rights allotted to U.S. citizens have been added to the curriculum so that CMC can help contribute to an informed and active community.

A course like this is invaluable to many coming from places where their health or life was in danger as it provides a path to security, normalcy and acceptance as a member of their community as well as this country. To leave one’s home for any reason is a harrowing experience filled with obstacles and uncertainty. To be able to make a new home elsewhere and become a part of a new community is a comfort and endeavor with value that is difficult to put into words. CMC works to provide a path for people to feel welcome in our community who may have not been welcome or had the same opportunities in their home.

While learning about Dr. Martin Luther King Jr., one student stated, “I have a dream, too. I have a dream to be a US citizen by the 2020 election.” CMC is proud to help make these dreams come true. 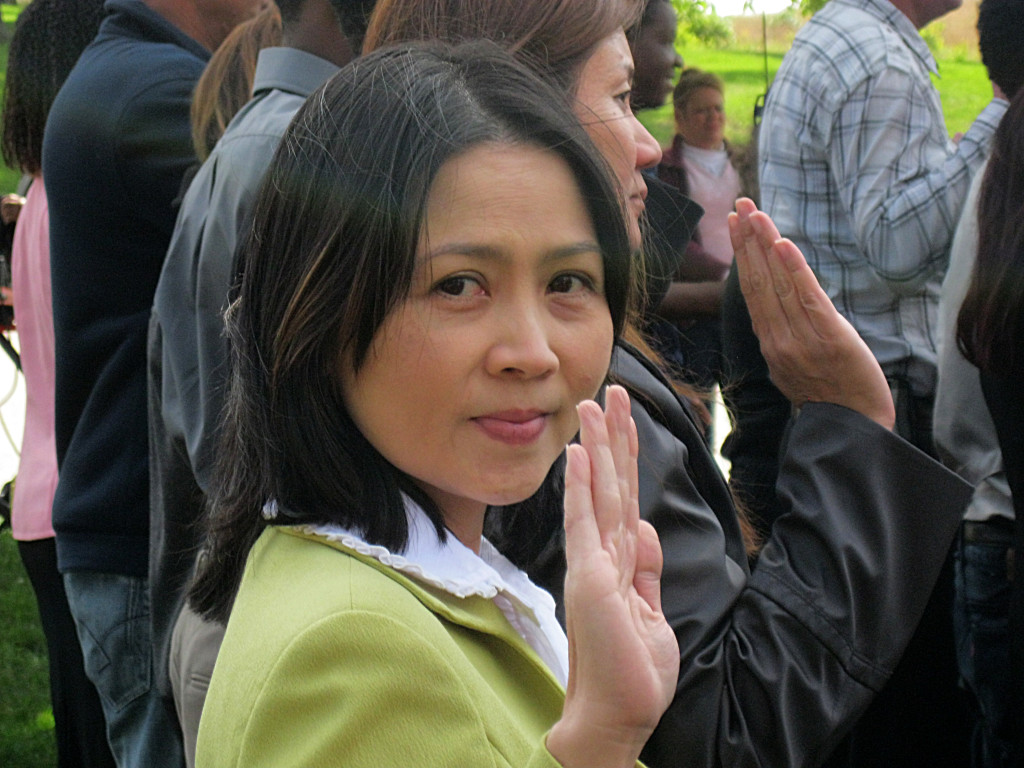 “Watching my student LanKhanh take the Oath of Allegiance was a proud day for us all. At the Center we celebrate with every student who passes the citizenship test–with lots of joy and sometimes treats!” Paula Land

In FY13, 19 CMC students earned their U.S. Citizenship. Individuals who apply for naturalization must complete the four parts of the exam to earn Citizenship. They must demonstrate their ability to (1) read, (2) write, and (3) speak English in an interview with a federal immigration officer. In addition to English language skills, students must (4) memorize one-hundred U.S. history and government questions in order to correctly answer 6 out of a random set of 10 questions. Students can study citizenship at CMC one-on-one with a tutor and/or in a group class taught by the Immigrant/Refugee Coordinator. In FY13, 37 students spent a total of 308 hours in this class becoming familiar with the complicated citizenship process.

U.S. Citizenship bestows many benefits to those who attain it: voting rights, potential for federal employment, healthcare benefits, and Social Security benefits. In addition to these federally mandated benefits, citizenship signifies to potential employers that individuals are more integrated than non-naturalized immigrants. According to the Migration Policy Institute, “Even after controlling for the fact that naturalized immigrants have higher levels of education, better language skills, and more work experience in the United States, there is some evidence that the naturalized may earn a wage premium that different studies have estimated at 5 percent or more.” 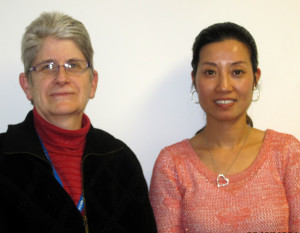 Mei Hui is a CMC student from Fujian, China who obtained her US citizenship this year. She diligently studied the citizenship curriculum with her tutors, volunteer Susan Liddell and staff Sherryl Gaffney-Paige, until she knew the material perfectly. Mei and her husband own Oyama Japanese Steakhouse. She says that many hours of studying at CMC have given her greater confidence in her English conversations with customers at the restaurant. 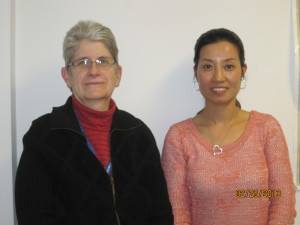 Mei Hui is an adult education student from Fujian, China who recently obtained her US citizenship after months of preparation.  She endlessly studied citizenship flash cards and worksheets with her tutor, Susan Liddell, until she was sure she knew them perfectly.  Mei was deeply committed to this goal because she wants to bring her parents to the US to live with her family.  Without her US citizenship, her parents would be unable to stay permanently.  Mei and her family are now eagerly awaiting the completion of the required paperwork and hope that her parents will be with them sometime this summer.

Mei is a waitress at Oyama Sushi.  She reports that many hours of studying both independently and at CMC have given her greater confidence in her conversational skills with customers.  As a result, she has also seen a significant increase in her tips.

If you are interested in becoming a CMC tutor and helping others like Mei Hui, click here! We need more than 100 new volunteers each year to keep up with demand, and you could be one of them!

From The Mustard Seed, Winter 2012
By Ann Sullivan, Volunteer Tutor 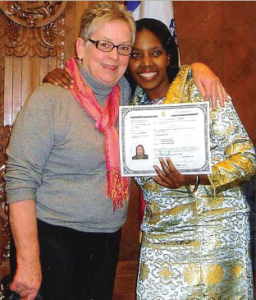 It’s a day of celebration whenever Catherine McAuley Center students return to the Center with a certificate of citizenship in their hands and a proud smile on their faces. This year that has happened eleven times. Leading up to that day were many hours of preparation, not to mention nervous jitters.

I have the privilege of working with one of these people, a lovely woman from Rwanda. She and her family spent some years as refugees before they came to the United States, first to Denver and then to Cedar Rapids, where they like the small city atmosphere. That move was about two years ago. After about five months Françoise began coming to CMC. Her English skills have improved beautifully. Early in the fall, she asked to work in the Citizenship book and with the citizenship flashcards. As we did so, we talked about the steps in the citizenship process. There was paperwork, an interview and exam, and, finally, the ceremony. Whenever we talked about the ceremony, we called it the “oath day” and raised our right hands.

That day was set for December 2, 20 11, at the Federal Court House in Davenport. There were concerns about it being a strange, new place and about the possibility for bad weather. But the Court House was very easy to find, and it was a beautiful, sunny day.

After passing through heavy security, the soon-to-be citizens, fifty of them in all, found their assigned places, and their families and friends filled in the available seating. Thorough instructions were given, a few short speeches of welcome were made, and then Judge Thomas Shields rose and performed the ceremony that made these individuals from over twenty countries new citizens of the United States of America.

The Judge’s address after the oath was very moving. He said that he was an adopted child and liked to think of these new citizens as being adopted by the United States. He acknowledged that they had just sworn loyalty to the United States and were no longer citizens of their former countries. But he advised them to never forget their homeland, their culture, their language, their customs, or… their grandmothers’ recipes.

After the ceremony, there was time for photographs. Each time Françoise posed, she held up her certificate, and if near a flag, she grasped it with her other hand. There was no mistaking that she was happy and proud. The family photos were especially meaningful because, on that day, everyone in her family was an American citizen. And I must say that I felt like a proud mom and grandma.

I wrote to Judge Shields afterwards, thanking him for his beautiful sentiments. In a reply to me he said, “I hope when you have the opportunity, you will tell other people about your experience at a naturalization ceremony and encourage them to attend if at all possible.” This is my opportunity.