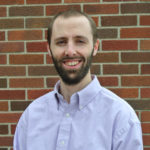 Legacy. I reflected on that word as I returned to Iowa from a visit out of state with my 100-year old grandmother. I arrived home in Iowa to learn that former Iowa governor Robert D. Ray had died.  I’ve wanted to meet Governor Ray in person over the past few years and regret I never met him. I admire Governor Ray for numerous reasons, but especially for his work and advocacy for Southeast Asian refugees.

The state of Iowa has a history of welcoming refugees because of Governor Ray. Back in 1975, Governor Ray and 29 other governors received letters from the Tai Dam people requesting they be resettled together in the US as refugees. The Tai Dam, a minority ethnic group from Northwest Vietnam, fled for their lives four separate times. Governor Ray alone answered this request and worked to bring hundreds of Tai Dam to Iowa, making the state of Iowa became the only US state to directly sponsor refugees. 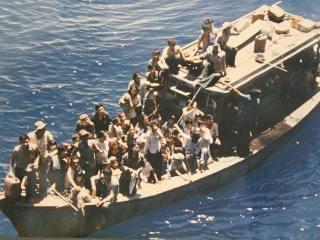 In 1979, Governor Ray offered to resettle 1500 Vietnamese “Boat People” in Iowa. Later the same year, Governor Ray visited refugee camps in Northern Cambodia where he saw children die from malnourishment and disease. To help, Governor Ray formed the Iowa SHARES program to provide food and medical aid to these people.

Furthermore, Governor Ray advocated for the Refugee Act of 1980 which established our current national framework for resettling refugees. Ray’s influence moved fellow Republican legislators to support the Refugee Act. The 1980 Refugee Act may not be law today if not for Governor Ray’s support. I thank Governor Ray for his compassion and leadership to bring refugees to Iowa. I am happy to work in the shadow left by the late Governor as work with refugees continues here in Iowa.

Governor Ray’s work teaches me. I must learn from my mistakes. Governor Ray made some mistakes when Iowa began resettling refugees in 1975. Governor Ray and those initially involved in refugee resettlement made errors in judgement by elevating the Tai Dam over other refugee ethnic groups. Colleen Shearer, the Iowa Job Services director whom Governor Ray put in charge of resettling refugees, accused ethnic Vietnamese refugees of committing welfare fraud. Governor Ray backed her. The state refugee program also came into conflict other volunteer agencies working with refugees. But Governor Ray and those helping refugees learned from their mistakes and made changes to those programs. They repaired frayed relationships among agencies all seeking to help refugees. 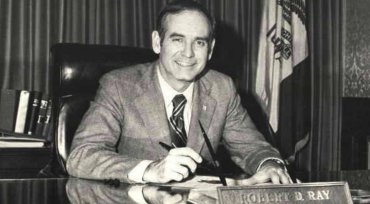 Governor Ray teaches me to do the right thing in spite of fear of making mistakes and even with suspect motives. Governor Ray chose to bring refugees to Iowa when a majority of Iowans disapproved. Governor Ray had compassion for refugees, but also set up a state agency to resettle refugees to maintain control of the program. Governor Ray so opposed welfare, that some refugees were sanctioned or denied services for going on state cash assistance. I do not admire all of these motives, but I applaud Governor Ray’s actions.  On May 29, 1979 at a Congressional hearing, Governor Ray explained his decision to bring more refugees to Iowa. “I saw that we really only had two choices: we could either turn our backs as countless others suffered and died, or we could extend a hand to help, and in so doing prevent tragic loss of innocent lives. Actually, I saw only one real choice. I wrote President Carter January 17, informing him that Iowa would resettle an additional 1500 refugees during this year.”

Governor Ray’s memory strengthens my resolve to better help refugees here in Iowa. When confronted by needs of others less fortunate than ourselves – whether here in Iowa or around the world – may we, like Governor Ray – be compelled to help.

To learn more about Governor Ray’s work with refugees, please read Matthew Walsh’s book The Good Governor: Robert Ray and the Indochinese Refugees of Iowa and a tribute to Governor Ray by Kenneth M. Quinn, World Food Prize President, former Ray staffer, and key player in the original resettlement of refugees in Iowa.