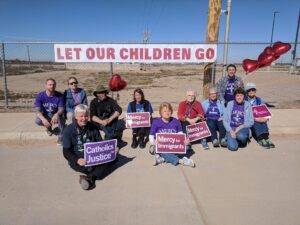 This Women’s History Month, CMC would like to highlight the stories of women in our community doing work in the areas of the Sisters of Mercy Critical Concerns. With this week’s focus on immigration, we spoke with Sister Kathy Thill, a local member of the Sisters of Mercy, about her experiences with immigrants at the southern border of Texas and the unheard stories of asylum seekers pursuing a better life. Sr. Kathy’s journey to the border examines the need for the general public to understand what is happening to immigrants in our country today.

In the year 2000, Sister Kathy ventured down to Southern Texas to work with immigrants from Mexico with an organization by the name of ARISE. ARISE is a nonprofit founded in 1987 by Sr. Gerrie Naughton (also a member of the Sisters of Mercy), and is now operated and led by the immigrant community on the southern border.

At the border of Texas and Mexico, Sr. Kathy came to know the families of immigrants coming to America for a better life. She learned of their struggles and the discrimination that they faced, while at the same time learning of their strength, resilience, and their innate capabilities to become leaders in their communities. In particular, she saw the strength of the women who were there. Sr. Kathy explained that “the women are very strong and very courageous. Imagine going to a new country, all of the hardships you’ve faced, only to be met with new obstacles at the border. They’re just trying to build a better life for their children.” This experience motivated Sr. Kathy to continue working for immigrant communities in whatever way that she could.

Sr. Kathy returned to Waterloo, Iowa in 2005, but continued to work with immigrants by volunteering at a small non-profit agency. In May of 2008, the nonprofit that Sr. Kathy worked with was made aware that Immigrations and Customs Enforcement (ICE) was planning a raid at Agriprocessors, Inc. On May 12, 2008, the raid had begun, and Sr. Kathy was notified.  She immediately went to spend several days assisting immigrants and their families. This was a clear example of the inhumane and unjust treatment being given to our immigrant communities. On May 20th of that same year, Sr. Kathy was invited to speak at a congressional hearing in Washington, D.C. about the impact of the raid on children and families in the community.

Sr. Kathy’s continuing concern for immigrants motivated her to jump at the chance to join a Mercy delegation to El Paso, TX  in November 2018. This border witness experience was sponsored by the Sisters of Mercy Justice Office and was offered in conjunction with Annunciation House which offers hospitality to immigrants and refugees in the border region of El Paso. Visits were made to the Diocesan Office of Migrant and Refugee Services, US Border Patrol. Her delegation participated in a demonstration and interfaith prayer service outside of a detention center for children in Tornillo, TX. In 2019, she returned to ARISE in Alamo, Texas to learn about the individuals who are seeking asylum in America.  Both of these trips provided opportunities to have conversations with border patrol officers, and a variety of agencies serving the immigrants seeking asylum. During both of these visits, Sr. Kathy’s days were filled with powerful experiences and learnings that left her heart heavy and at times, hopeless. She was left wondering what can be done to change the heartless and inhumane policies and practices against innocent women, men, and children who are just trying to survive– who want a better life for themselves and their children. It was apparent that the general public needed to understand what was specifically happening to asylum seekers and immigrants at the southern border. 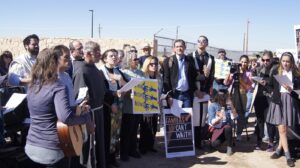 After learning what life and conditions are like on the border today, Sr. Kathy used the information and stories gathered from the trips to educate the local community on what people seeking asylum have gone through. She has presented at Mount Mercy University, as well as shared her experience with the board of Catherine McAuley Center and various individuals– ultimately aiming to educate people about the U.S. immigration system and spur action in our community. “Most of the response (from the audiences of my presentations) was very supportive and understanding… but also shocked. A lot of people had no idea of what people were experiencing. There’s no way – how would people know unless you go there and see it? We’re removed from asylum seekers and immigrants and we don’t really know how the laws put in place have affected their lives.”

At the end of our conversation with Sr. Kathy, we asked her a simple question for a complicated issue: what can we do? Sr. Kathy responded, stating “I think we need to pay attention to what’s happening. There are going to be changes to immigration laws, new laws proposed on how we can deal with immigration and the needs of these people at our borders seeking asylum… a lot will be happening. Listen to the news, listen to stories of people’s experiences, and take advantage of opportunities and different ways to get involved.”

We thank Sr. Kathy for taking the time to speak with us about the vital topic of immigration as a critical concern. If we have one takeaway from our conversation with Sr. Kathy, it is this: Pay attention. Listen to stories. Get involved.

For current information on immigration laws in the United States and across the globe, visit https://www.migrationpolicy.org/. 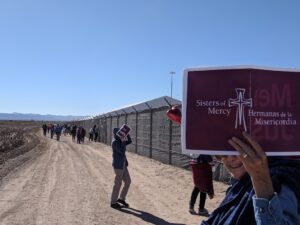