The principles of “we the people”, and “liberty and justice for all” enshrined in our founding documents have long beckoned refugees (people forced to flee their country because they fear persecution for who they are or what they believe) yearning to breathe free to come and make the United States their home. These families and individuals desire peace, work, a new life, and a chance for a country to call their own, to which they can contribute. For the past 40 years, the United States has provided many refugees a chance to fill these needs, needs that all of us born in this country share. 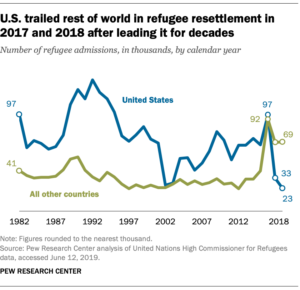 Under Republican Governor Robert Ray, the state of Iowa was the first state in the U.S. to welcome refugees. Prior to the current administration, the U.S. accepted an average of 81,000 refugees per year. Under President Ronald Reagan, refugee arrivals reached as high as 207,000 per year. President Reagan promised that we would continue the American tradition of “welcoming and resettling those who flee oppression” and warned that if we ever close our door to new Americans, our leadership in the world would soon be lost.

The current administration has rejected our country’s proud tradition of welcoming refugees. Under current law, the President issues a determination of the upper limit for the number of refugees allowed to come into the country for that year. The law states that the President shall make this determination before October 1 of each year after consulting with Congress. This year, as in previous years, the President failed to consult with Congress on this decision, in violation of the law. The current administration will only allow up to 15,000 refugees to arrive in the U.S. this year, the lowest number since the beginning of the refugee admissions program 40 years ago. These reductions come when the number of refugees throughout the world is higher now than at any time since World War 2. 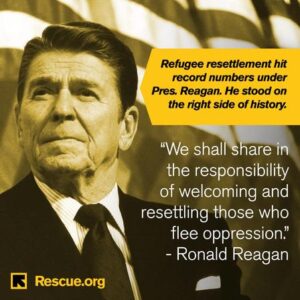 Furthermore, the current administration has made it practically impossible for those fleeing violence and persecution to apply for asylum. We condemn the onerous reductions in refugee admissions by our current administration. We urge the federal government to follow the examples of Iowa Governor Robert Ray and President Ronald Reagan and once again make America a beacon of welcome for refugees.