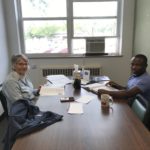 So much of CMC’s mission to offer hope and opportunity depends on dedicated and kind volunteers who lend their skills in areas ranging from administration to grounds-keeping. Without such dedicated and kind volunteers we wouldn’t be able to serve the community in such a profound way. So, over the coming months we will be sharing stories of various volunteers as just one way to show our appreciation. Join us as we get to know some of the hundreds of people who dedicate their time to CMC.

Jane Carlson has tutored at CMC for eight years. In that time, she’s gained more than just the satisfaction that comes with volunteering: Jane has made new friends, kept up with long-time friends, and ushered an individual through some of the most significant points in his life, all while developing some new perspectives of the world around her.

Jane has been a resident of Iowa for 39 years and spent 28 of those years managing the accounting department at DC Taylor Co. in Cedar Rapids before retiring in 2009. With her new-found spare time, Jane began volunteering. Following another volunteer experience that proved more stressful than fulfilling, she was in the market for a new opportunity. She came to CMC in 2011 after reading about the Adult Basic Education Program in the newspaper.

Throughout her time here, Jane has worked with a multitude of adult learners in English and helped one particular student prepare for the U.S. Citizenship Exam. Jane first met Theo when she stepped in as a substitute for Theo’s usual volunteer English tutor. Bu 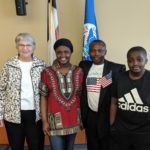 t by what seems now to be serendipity, the two were later matched for weekly lessons, where Theo gained confidence in his English skills. According to Jane, “his English got so good that other things became higher priorities for him.” After spending some time placing more focus on his love of farming, he later contacted Jane in 2017 to request tutoring in U.S. Citizenship Exam preparation. After working diligently for some time, practicing the 100 questions with Jane and watching films on U.S. history that she recommended, Theo passed his citizenship exam and invited Jane to attend his naturalization ceremony.

The tutoring experience is certainly rewarding, if for no other reason than to watch someone grow as they work towards their goals. But as Jane found out, the satisfaction doesn’t have to be limited one reason. Jane has been able to make friends with other volunteers and maintain friendships from her own community of Mt. Vernon with people who also volunteer at CMC.

The most important lessons, though, challenged her perspective. Jane says she kept “remembering how this is all new to the person, that they come here, and they might know about freedom or religious freedom, but they don’t really know the background and how we have to explain that.” Moments like these and the connections she’s been able to make are the reason why tutoring “is the highlight of [her] week.” Tutoring is challenge and as an accountant it requires, “using a whole other part of [her] brain.” There’s always something to learn here at CMC whether you’re a volunteer, staff or client. The amount of people and cultures that leave their mark is immense. Jane’s never stopped taking in all CMC has to offer plus “… to see all the people learning English from different countries interacting with each other [is] really great.”

Thank you, Jane for the part you play in our community of learners!