The original “building on stilts” site

CMC was initially founded to offer education to women studying for their General Education Diploma. A few months later, the Transitional Housing Program was introduced for women without children in their care. After outgrowing the space in the original “building on stilts” location on 10th Street, CMC moved to its current location at 866 Fourth Avenue SE in 1993.

Throughout its history, CMC’s programs and services have adapted to meet changing community needs. In response to a growing immigrant population in Cedar Rapids in the mid-1990s, the Center added English as a Second Language tutoring and U.S. Citizenship Exam preparation, establishing the Adult Basic Education Program, open to both men and women. In 2017, CMC launched added services for immigrants and refugees, including a refugee resettlement program as an affiliate site of the U.S. Committee for Refugees and Immigrants.

The Center has grown from serving 15 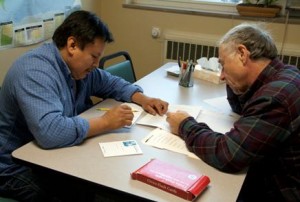 people in its first year to serving approximately 500 people annually today. Even as it has grown and evolved, the Catherine McAuley Center has stayed true to its core mission of offering hope and opportunity to individuals seeking to gain the knowledge and skills that will help them lead self-sufficient and fulfilling lives.