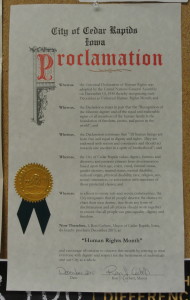 Last week, the Catherine McAuley Center (CMC) was proud to stand with the Cedar Rapids Civil Rights Commission and other local leaders to receive a proclamation from the Cedar Rapids City Council declaring December as Human Rights Month.

At CMC, we believe that our future depends on inclusive communities that welcome, respect, and support a diversity of individuals and ideas.

A transcript of the proclamation, signed by Mayor Ron Corbett, follows:

Whereas, the Universal Declaration of Human Rights was adopted by the United Nations General Assembly on December 10, 1948 thereby recognizing each December as Universal Human Rights Month; and

Whereas, the Declaration states in part that the “Recognition of the inherent dignity and of the equal and inalienable rights of all members of the human family is the foundation of freedom, justice, and peace in the world”; and

Whereas, the Declaration continues that “All human beings are born free and equal in dignity and rights. They are endowed with reason and conscience and should act towards one another in a spirit of brotherhood”; and

Whereas, in efforts to create safe and secure communities, the City recognizes that all people deserve the chance to chart their own destiny, free from any form of discrimination and all citizens should work together to ensure that all people can gain equality, dignity, and freedom.

Now Therefore, I, Ron Corbett, Mayor of Cedar Rapids, Iowa, do hereby proclaim December 2015, as “Human Rights Month” and encourage all citizens to observe this month by striving to treat everyone with dignity and respect for the betterment of individuals and our City as a whole.

CMC thanks the City of Cedar Rapids and Mayor Ron Corbett for the invitation to receive the proclamation and for its encouragement of all Cedar Rapids citizens to exhibit a recognition of universal human rights in their daily lives.